Team spirit – with a little help from competition! 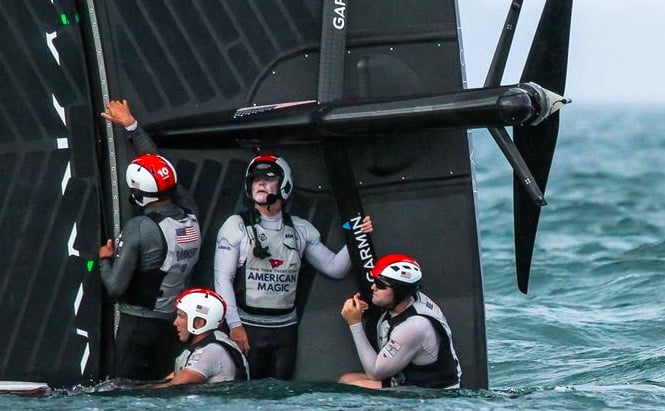 In a recent example of Team Spirit, the current PRADA cup in Auckland was in the middle of the race when disaster struck.  The dramatic tack of American Magic’s AC75 racing yacht, “PATRIOT”, resulted in loss of control.  They were leading the Italian “Luna Rossa” when their vessel went airborne and hit the water before falling on its side.  This automatically handed their Italian opponents their second victory of the series from four races.

All members of the American team were accounted for before efforts began to save the yacht.  Their two other competitors in the series (INEOS Team UK and Emirates Team NZ) all collaborated quickly to save the vessel and the team.  It didn’t matter what branding was on their shirts, everyone rallied around, in strong gusts, to get the team home safe.

So strong was the team spirit that a very public thanks to their competitors followed from the American team. 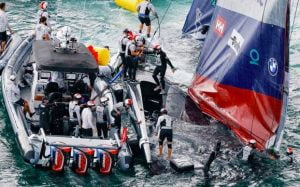 There is no better example of Team Spirit than when, in extreme conditions, your nearest competitors ask how they can help you or collaborate with you. …or indeed you ask them!

And that’s what should  happen when we are stuck, right?   Drama and challenging conditions can bring out the best spirit in teams.  Competitors help us stay on our toes but they can also bring something extra that we need at times.  After all – they know us well and we know them!

What is Team Spirit?

Team Spirit is defined as the feeling of pride and loyalty that exists among the members of a team that makes them want their team to do well or to be the best.

So how do we get team spirit?

Firstly it’s definitely not something you acquire on a training course. It’s not something that we get from team building days spent swinging from trees or puzzling our way with planks of wood over a river.

Sometimes it is about looking for answers in unexpected places – even your competition!  It’s about confronting something unspoken, or something that is painful to deal with.  It’s about going through loss together with people who see you at your best and at your most vulnerable.

For me Team Spirit is summed up in the powerful poem from Amanda Gorman at the Biden inauguration ceremony:

“That even as we grieved, we grew.

That even as we hurt, we hoped.

That even as we tired, we tried.

That we’ll forever be tied together, victorious”.

If I think back to the teams that I have been part of, not all of them had team spirit.  The ones that did are teams that years later I feel pride and a deep loyalty towards.  Often grateful for the moment in time we all shared and the growth that being part of it gave us.

Our Team Results gives an overview of what you can expect and how we work.